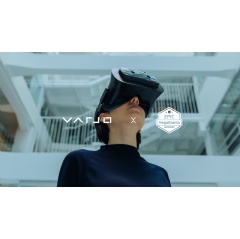 Varjo, a leading provider of industrial-grade VR/XR headsets and software, has received a MegaGrant by Epic Games to further develop its mixed reality support for Unreal Engine. Epic MegaGrants is a $100 million program that supports creators doing amazing things with Unreal Engine or enhancing open-source capabilities for the 3D graphics community. The sizable MegaGrant will be utilized in support of the Varjo XR-1 Developer Edition headset as part of the mainline offering of Unreal Engine, strengthening immersive solutions for enterprises worldwide.

“Varjo currently provides one of the most advanced mixed reality hardware and software solutions for demanding industrial use,” said Sebastian Loze, industry manager for simulations at Epic Games. “We are excited to soon have mainline support for Varjo products in the primary Unreal distribution to continue delivering the highest-end visualization for our customers. The addition of new mixed reality features in Unreal Engine enables a new class of application development.”

“We are thrilled to have this support from Epic Games to expand our delivery of mixed reality solutions for the most demanding enterprise VR/XR applications through Unreal Engine,” said John Burwell, global lead of simulation and training at Varjo. “With OpenXR as the target interface, developers will, for the first time, have access to the industry’s most advanced enterprise-grade mixed reality features to support composing real and virtual environments for a wide variety of applications. Planned features include full support for Varjo’s photorealistic visual fidelity, eye tracking and real-time chroma keying. The resulting solution is likely to position Unreal Engine as the most advanced platform for enterprise mixed reality development.”

The Varjo XR-1 Developer Edition brings unique features to the market offering human-eye resolution visual fidelity (over 60 PPD in the center of the field of view), integrated depth sensing, and low latency video pass-through mixed reality. With the Varjo XR-1, developers are able to create highly immersive, cost-effective virtual and mixed reality simulation experiences for a broad range of use cases including industrial design, AEC, medicine/telemedicine, research, and simulation and training scenarios across land, sea, air, and space use cases. With Varjo, trainees can for the first time read text on displays and interact with the smallest buttons, switches and gauges, as well as see objects at realistic visibility ranges.

Click here to learn more about how Varjo’s devices are being used in some of the world’s most demanding industries.

About Varjo
Varjo is based in Helsinki and is creating the world’s most advanced virtual and mixed reality devices for industrial use, merging the real and virtual worlds seamlessly together in human-eye resolution. www.varjo.com