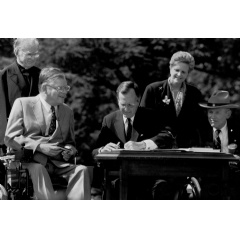 The signing of the Americans with Disabilities Act (ADA) on July 26, 1990, was a watershed moment in U.S. history. This historic legislation opened up opportunity to millions of Americans who live with a disability, but there’s plenty of room to do better says Tari Hartman Squire.

“We set out to create an event that would elevate voices and flip the script. It was imperative to us that people with disabilities own this narrative on the anniversary of the ADA,” she said.

Tari produced and directed the 2.25 hour virtual event, which premiered last week, and featured an all-star ensemble of deaf and disabled performers, artists, filmmakers, storytellers, disability leaders, policymakers and key influencers. Emceed by entertainer and comedian, Danny Woodburn, who was also Tari’s co-producer, the star-studded program illuminated the profound impact of the ADA on American life.

Due to COVID-19, a planned live performance at Kennedy Center shifted to a virtual format instead.  The cast and crew met weekly for months – from their own homes across the country – to pull together a monumental collaboration. And, as a result of the format change, the event reached a much greater audience, maximizing the impact of its message. The premiere alone garnered an audience of 28,671, and that number has continued to swell beyond 60,000 since the event.

Chief Compliance Officer David Huntley of AT&T, Inc. delivered opening remarks, saying: “The ADA is a beacon for progress that can only happen when determined activists, people like you and me campaign and lobby for change. At AT&T, we’re committed to the ADA mission and ensuring that we are providing equal employment opportunities to people with disabilities because it makes us a better company.”

President George H. W. Bush signed the ADA into law. Modeled on the Civil Rights Act of 1964 and the Rehabilitation Act of 1973, the ADA is the most comprehensive disability rights legislation in history providing protections in the areas of employment, government and transportation, public accommodations (restaurants, hotels, stores and arts venues) and telecommunications.

Susan Mazrui, director of public policy with AT&T, facilitated the company’s sponsorship of ADA30 Lead On. For her, the ADA has impacted many facets of her life, “As a person with a disability, the law enables me to fully participate in the workforce and support my family.  It also means I have the opportunity to travel, to go into public places,” she said. “It means my rights are protected, and I can’t think of anything that’s more important than that.”

Image description – Two gold comedy and tragedy masks with red and blue accessible PPE face masks showing the smile of comedy and frown of tragedy, next to a paint brush that is creating a musical staff that ends with a dancer using a wheelchair. The words ADA30 LEAD ON at the top, with Celebration of Disability Arts, Culture, Education & Pride appear underneath. Thanks Dan Wilkins for an awesome logo.