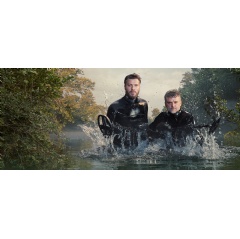 The River Hunters are back – bigger and better than ever – making their way across Britain to officially search the rivers and waterways of some of the country’s most important archaeological sites for the very first time.

The 6×60’ series once again pairs US Youtube sensation, river detectorist Beau Ouimette, with TV presenter and keen swimmer Rick Edwards, as they delve into the depths of Britain’s watery past.  From the Rivers Ouse and Derwent in Viking York, to the bloody battles of the Jacobite Rebellion near the Rivers Tay and Braan, Rick and Beau will be joined by diving archeologist Gary Bankhead, as they once again seek to unearth treasures from the riverbed.

Using state-of-the-art underwater technology, live drone footage and accounts from the period, Beau and Rick perform the first underwater archeological digs in some of the most exciting and iconic historical sites in Britain, often in dangerous and fast-flowing water.  The team will be following Covid-19 health and safety restrictions throughout the production.

To further their search, they will be joined by local archaeologists, metal detectorists and historians in each episode, who – in some cases – have waited years for this unique opportunity to search these sites.  The returning series will offer a new perspective on each river’s layered past and could redefine our history as we know it.

Dan Korn said: “We’re delighted to welcome back Beau, Rick and Gary to Sky History and excited at the prospect of watching them as they reveal a whole new slice of British history. In the first series they recovered items from the Bronze Age, Roman and Medieval eras, right through to World War 2.  We can’t wait to see what they discover this time around.”

Rick Edwards commented: “Two things I never thought I’d miss are freezing cold British rivers, and an eccentric little American YouTuber. And yet here we are – I‘ve missed both and am excited to be reunited with them! If we find some treasure, and avoid Weil’s Disease, that’ll just be a bonus”.

Beau Ouimette commented: “I am super stoked to be back in the UK with my river hunting gear locked and loaded for another go at uncovering more awesome artefacts that have been lost or hidden in the many historic rivers over here. I am fully confident that in each episode of season two of River Hunters that we will be successful in retrieving lost history. Not only do I fully expect that we will add knowledge to the historical record of this great land, but I also believe that we may uncover new mysteries out there, just under the surface of the rippling rivers.”

Natalie Hill is the returning Executive Producer, with Eoin O’Shea as Series Producer and Series Director.

Natalie Hill said: “With so many rivers unexplored in the UK I am delighted we are back for another series.  Each episode delves into a significant period of history but with so much discarded and hidden in our waterways, the series is also a journey into the completely unknown.  Last time we unearthed a perfectly preserved bronze age axe, who knows what we’ll find this time…”.

River Hunters series 1 premiered in the UK on HISTORY® in March 2019 and will get its channel premiere on Sky HISTORY2 on 17th September 2020 at 9pm.

The new series has started filming and will air on SKY HISTORY in the UK, and on HISTORY in Netherlands, Belgium and Sweden in 2021.