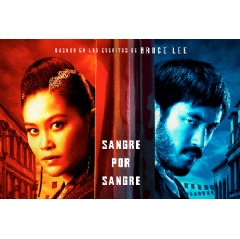 HBO reveals the official poster for the second season of the drama series WARRIOR. The series follows the story of the Chinese Mafia wars in San Francisco and is based on the writings of martial arts legend Bruce Lee.

The new series premieres on October 2nd, at midnight, on HBO Xtreme and HBO GO.

WARRIOR is a bold, action-packed drama set during the Tong Wars in San Francisco’s Chinatown in the late 1800s. It follows the journey of Ah Sahm (Andrew Koji), a martial arts prodigy who emigrates from China to San Francisco under mysterious circumstances. After proving his prowess as a fighter, Ah Sahm becomes a hitman for Hop Wei, one of the most powerful tong (Chinese organized crime family) in the neighborhood.