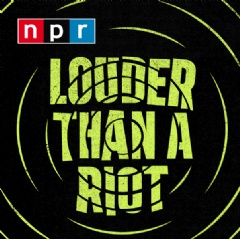 Louder Than A Riot, a short-run podcast from NPR Music, hosted by Rodney Carmichael and Sidney Madden, examines the interconnected rise of hip-hop and mass incarceration. This first narrative podcast series from NPR Music will explore one of the most pressing civil rights issues of our time through the stories and sounds of hip-hop artists. Weekly episodes will be available starting Thursday, October 8.

Each episode uses the experiences of hip-hop artists to investigate a different aspect of the justice system — from RICO laws and racial profiling to plea deals and probation.

“These are two American-made institutions that not only grew side by side, but actually intermingle with each other,” Sidney Madden said. “Through stories of the people, the lyrics and the culture, we’re breaking down how hip-hop has always held up the mirror to society’s obsessions with race and criminality.”

“If ’a riot is the language of the unheard,’ like Dr. King said, then rap is the definitive soundtrack,” said Rodney Carmichael. “For 40 years, rappers have been the biggest critics — sometimes even the biggest targets — of the over policing and mass incarceration the rest of America is finally waking up to.”

“Louder Than a Riot tells a powerful story about race, music, injustice and power that resonates deeply with this moment in American history,” said Lauren Onkey, Senior Director of NPR Music.

Hear the Louder Than A Riot teaser now on Apple Podcasts, NPR One, NPR.org, Spotify, Pocket Casts, or wherever podcasts are available. New episodes of Louder Than A Riot will be published on a weekly basis over the course of 10 weeks.