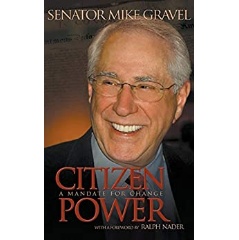 The government is a representative of the people and therefore, should aim to serve the masses accordingly; however, in some cases, there is an increase in corruption and negligence to the people’s welfare. When this happens, a country’s stability is in jeopardy.

In “Citizen Power: A Mandate for Change,” author and former United States Senator Mike Gravel lists his ideas and views on why there is a need for so much change in the country. An example of change is the need to remove corruption from within the government and the management of crimes within major cities, and this must be done for officials to serve the people better.

Here is a quote from a reader of Mike Gravels work: “Senator Gravel has produced an engaging book! He presents complex and difficult issues facing the US and the world in understandable prose and proposes solutions that call for transformational change.” This comment is justified because the book does identify the problems faced by the county as well as how to deal with them.

About the Author
Mike Gravel was a US senator from Alaska for 12 years, from 1969 to 1981. He was most well-known for declassifying secret documents to the public regarding the Vietnam War known as the Pentagon Papers.
As his time being a senator, he made an amendment authorizing the construction of the Alaska pipeline, which is the only reasonable way to get the crude oil from Alaska’s northern slopes.