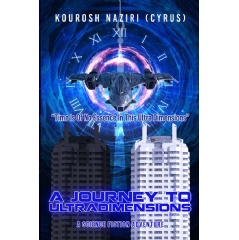 “A Journey to Ultra Dimensions” is a science fiction adventure story between Captain Houshmand and the Xinterrians and Meh-jazians. The story begins with Captain Houshmand’s fiancée, Delaram, being kidnapped by the Xinterrian leader, Zieman Kahn. Captain Houshmand will need to rescue Delaram and save planet Earth from the Xinterra and Meh-jazian invasion. On his way back to Earth after he learned about the kidnapping, Houshmand ended up in a different dimension that resembled Earth. General Sherner, the leader of the Ultra Dimension station, explains to Houshmand why he is there. Houshmand, who possess special qualities, that must right a wrong from the past. Houshmand returns back to Earth equipped with some great advice from General Sherner. An epic battle will ensue. Can Captain Houshmand save Delaram and Earth from an evil invasion?

“The author obviously knows a lot about electronics, and it is evident in the story. I like how feisty Delaram was, speaking incoherently when they beamed her out of the robot. Surprisingly, she then slaps Houshmand for taking so long to rescue her. The idea of the story is very interesting and sci-fi lovers would enjoy it, but the story and the characters need to be more fleshed out. Since the story was so short, I felt the introduction of all the Lieutenants and Commanders and Engineers was overwhelming. I felt like the author kept throwing new characters in the story, but they didn’t really serve a purpose to the story.”

“‘A Journey to Ultra Dimensions’ is a decidedly odd beast. Billed as a science fiction/adventure novel featuring romance and a touch of humor, it actually reads more like a treatment for a television series or as the preface or first story in a space opera collection. At under twenty pages in length, the story offers only a whistle-stop tour of the author’s many interesting ideas, although the overall plot and some characters do show promise.

“This brief outline will likely seem familiar to science fiction fans, and that’s no bad thing. Intergalactic warfare, deadly rivalries, thwarted romance, and the coexistence of multiple dimensions are all interesting and popular aspects of the genre. The issue with ‘A Journey to Ultra Dimensions,’ however, is one of execution rather than of concept. The story is simply far too short to do justice to the many ideas the author tries to pack in. For instance, the background to the war needs to be made clearer if readers are to really care about it.

“More importantly, the existence of ultra-dimensions and the potential to travel between them, which really should be central to the story, are not considered in sufficient detail. The concept of ultra-dimensions could be the novel idea that differentiates this story/universe from the rest of the genre, but only if the author expands on it considerably. If this was combined with a change in the structure of the story and in the way it is told (i.e., if readers get to witness the action rather than just hearing about it as one character informs another), it would really enhance the reading experience.”