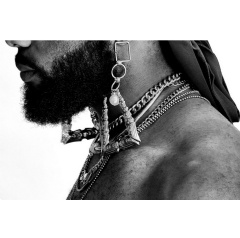 WePresent, WeTransfer,’s editorial platform, has partnered with Samsung for a new collaboration, Reflection, following the unveiling of its new Samsung Galaxy Note20 Ultra 5G phone. The campaign commissions work from three creative freelancers in the U.S. at the top of their fields, using the new Samsung Galaxy Note20 technology, and explores how each artist finds inspiration and produces work in this new age of remote working in 2020.

“Our mission at WeTransfer and WePresent is to highlight and amplify the stories of artists and their unique creative processes,” said Holly Fraser, Editor in Chief of WePresent. “We’re blown away by the resilience of the creative community through this challenging time. Together with Samsung, we’re not only showing support for the creative industry at this time, but showing how creativity isn’t limited to a time or place and that inspiration can strike anywhere, anytime.”

Produced by WePresent, for Samsung, this campaign explores the work of three artists made with the new Samsung Galaxy Note20 Ultra 5G.

●  Hayley Eichenbaum, Milwaukee: Through this pandemic, like many of us, Haley focuses on going back to her roots through her work, taking the Samsung Galaxy Note20 Ultra 5G on the road with her and reflecting on the place she calls home.

●  Neil Krug, Los Angeles: Neil’s project focuses on introspection, utilizing the capabilities of the Samsung Galaxy Note20 Ultra 5G to photograph a series of scenarios featuring a character in a rural landscape, embodying the emotions that he is feeling now. “How does one account for the year 2020? This year, I’ve found myself at my most reflective. I don’t remember a time before this that felt as introspective.”

●  Eric Hart, New York: A photographic series exploring the nuances of Black culture, specifically Black freelance creatives through himself, characters and components. Eric’s images are bold and arresting — “My skin, my hair, my demeanour, my habits, all of that is a reflection of the traits and practices of those who have come before me.”

The campaign will run on WeTransfer’s editorial platform, WePresent, from 23rd September, 2020, starting with a 24-hour US national content takeover on WeTransfer.com. For a full 24 hours, these three stories will appear on rotation on WeTransfer’s full screen background,, giving Samsung 100% platform exclusivity for launch.

WeTransfer makes tools to move ideas. Founded in 2009 in Amsterdam as a simple, well-designed file sharing service for the creative community, WeTransfer has grown to include tools that scale across the creative spectrum, including editorial platform WePresent (with 2M monthly readers), mobile app ’Collect by WeTransfer’ (with 4M monthly users), quick slide-making tool Paste® (with 40,000 active teams), immersive sketching tool Paper® (with more than 25M downloads), and the original web platform with 50M monthly users and over a billion files sent each month.

From the beginning, WeTransfer has prioritized bringing “offline” values – trust, transparency, and ethics – online. This means having a responsible data policy and tools that don’t distract people from their creative flow. WeTransfer has pioneered a new means of online advertising, resulting in the platform’s full-page wallpapers, designed by our award-winning in-house creative studio. Advertisers include industry-leading brands like Apple, Saint Laurent, Google, Balenciaga, Samsung, Netflix, Adidas, and Squarespace.

Since its founding, WeTransfer has proudly supported the creative communities and given up to 30% of advertising space to support the arts, donating over 5 billion impressions in 2017. Through our ongoing advertising grant program and content platform, WePresent, we have partnered with hundreds of groundbreaking artists and organizations, including Björk, King Krule, FKA twigs, Ryan McGinley, Ami Vitale, the Nelson Mandela Foundation, the UN Development Program, the World Wildlife Foundation and the Prince Estate. In 2016, WeTransfer launched the world’s first free Masters of the Arts in design thinking with the University of the Underground and Worldwide FM, the global radio station run by legendary BBC DJ Gilles Peterson.

Following a $25 million investment from Highland Europe in 2015, WeTransfer opened a US office in Venice Beach, Los Angeles, to add to the Amsterdam headquarters. In 2018, WeTransfer acquired popular creative apps Paper® and Paste® and expanded its US presence to New York City.