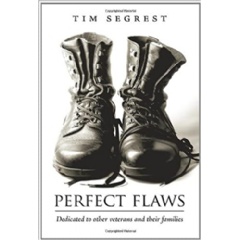 Tim Segrest’s “Perfect Flaws” is a collection of poems he wrote shortly after he was medically boarded out of the US Army due to his back problems in 2004. “Perfect Flaws” was published in 2006 and his first of many books detailing his bout with PTSD. Segrest shares his journey while in the military, the challenges he faced, and his personal battles following his depression and spine problem. Although most of the poems featured are related to his time in the military, some works are personal.

“I have given much thought into what this book is about but have failed to come up with an answer that I, personally, find fitting. Poetry, in itself, is an expression of how people feel or see a related topic or thought, which is usually never exactly like how another might view the same situation. I started these poems when I was going through a hard time in my life, both within the military and personally. The orders I was forced to carry out in the service didn’t help either. So, there are other than just war poems in this book. I guess this book is about something and nothing at the same time. It’s about all of us and how we see different phases in our lives. I merely have chosen to write about them, hoping I could help others along the way in some manner. After all, it did help me”, reads the book’s Amazon description.

While “Perfect Flaws” serves as Tim Segrest’s outlet for his depression and PTSD, Tim imparts to his readers his poetry outside the themes of war and combat and common adversities that we encounter in our society. Although largely personal, the book enables us to get a glimpse of how people diagnosed with PTSD deal with their lives, as well as the mindset of military personnel outside the combat paradigm. For me, these kinds of literary materials demonstrate a different side of their persona.

Although Tim Segrest’s career in the military was cut short, his talent for writing and the books he has published certainly is a great inspiration to the men and women in the service. Segrest’s books reach out to others, helping them cope up with not only post-traumatic stress disorder, but also other challenges that come with being a part of the armed forces.

Timothy George Segrest is a military veteran. He joined the military in 1983 as a jet engine mechanic with the Air Force. Segrest later transferred to the Army and trained as a sniper. Things were looking good but in 2004, Segrest was medically boarded out due to an issue with his back. He was later diagnosed with acute post-traumatic stress disorder and degenerative spine disease. These developments made him depressed and it even came to a point where Tim considered taking his own life. For some reason, Segrest started writing poetry and found solace in them. He then began writing more often and even wrote short stories and novels as he progressed in his writing career. One of his books is a poetry book published in 2006, roughly two years after he lost his opportunity to be a sniper in the United States Army.