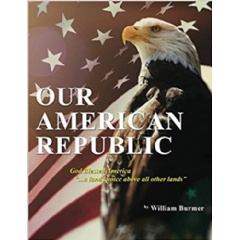 William Burmer’s “Our American Republic: God Blessed America” explores a vast array of questions that Americans should be asking about society, the government, the economy, and the overall political state of the nation as a whole- it serves as an eye-opening guide towards aspects of American society that the average United States citizen should know and embody, and is a highly educational source of information regarding American governmental and political facilities and policies as well as their implications on modern society.

These and many other questions about our government and nations’ history are answered in this thesis. It has taken twelve years of thought and research to complete this work. If you love America, you need this thesis in your library. It is filled with facts and truths’ much of which, is not normally seen or available to the average American.

When Mr. Burmer came home from the Vietnam Conflict in 1967, he was upset that the war was continuing. Barely 23 years old, many of the principles, and ideals taught to him by his parents, school, and church with regards to the country, flag, and religion burned within his heart. As the body count in this far away land continued to rise on a daily basis, William pursued a college education; simultaneously Graduating from Santa Monica College in CA, and from X-ray School in June 1972. By the end of March 1975, eleven years after the war in Vietnam began, it finally ended- In his own words, not the way the American soldier wanted, but at least the blood bath was over.

After losing his position as Chief X-Ray Technician at Delano Hospital CA in the fall of 1977 he found himself wondering what course he should pursue. He considered becoming a Plumber. Seriously, he was let go for doing his job. In order to comply with the Joint Commission on Accreditation of Hospitals, he was required to ask a Doctor employed by the Hospital to show compliance with a certain mandate. Taking offense, the Doctor complained to Administration. What could he say? POLITICS! At this same time in early 1978, a new diagnostic procedure was coming of age called Ultrasonography. After serious thought he and his spouse sold all their possessions and their home, to start over again in pursuit of a new profession. After twelve years’ time, he was able to start his own Ultrasound service.

After many years of hard work, and with all of these experiences, Mr. Burmer began to seriously question contemporary government at all levels, their law, and their taxing authority. There is nothing so revealing than to go into business for yourself and discover the real amounts of money that are confiscated by different government entities. Truly, the ideals taught during his youth about the American dream were contrary to what he was actually experiencing. After compiling vast amounts of information, and with careful documentation, it was ready to be put into written form.

He discovered some startling truths about history, and taxation not commonly known, and certainly not taught in our schools. Our American Republic is nothing if it is not at the very least enlightening. Mr. Burmer initially had no intention of writing a book, however, it took shape as a result of his attempt to make sense out of all the controversial materials he had accumulated. Materials and truth not normally seen or taught in schools, even the ones he attended during his lifetime.