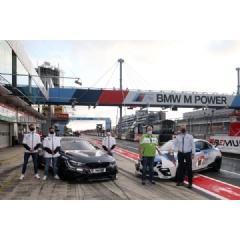 Representing the marshals was Walter Hornung, Nürburgring 24 Hours Race Director and board member Sport of ADAC Nordrhein, who received one of the gift packages from Dirk Adorf (GER). Adorf is not only a member of the board of ILN, but also mentor to the BMW Junior Team, which also attended the presentation as further representatives of BMW Motorsport. Dan Harper (GBR), Max Hesse (GER) and Neil Verhagen (USA) will make their debut in the 24-hour race this weekend.

The package contains useful items for the marshals, such as a BMW Motorsport cap and rain cape. As well as additional BMW Motorsport fan items, each package also includes a personal letter of thanks from BMW Group Motorsport Director Jens Marquardt. In this letter he said “The fact that this race has been going for half a century, and a BMW team has celebrated victory on 19 occasions during this time, is largely thanks to you. Your commitment as volunteers and your passion for the Ring are what makes it possible to stage this race.”

Adorf said at the presentation: “All the marshals are big motorsport enthusiasts and take extra time off to be here this weekend, and to take up their positions around the circuit whatever the weather. It is a tough job that demands an awful lot of passion from all involved. As such, BMW Motorsport and ILN felt it was very important to thank the marshals. The same goes for me, Dirk Adorf the racing driver. I thank you all for going out there and ensuring the safety of us drivers.”

As a salute to all the volunteers around the circuit, the BMW M6 GT3 run by BMW Team Schnitzer and the BMW M2 CS Racing Media Car will be among those to bear the message ‘Danke, Marshals’ this weekend.